The Birdlife Australia bird observatory at Fall Point is an ideal place to view the birds. Day visits to the observatory are welcome and overnight accommodation includes a self-contained cottage as well as single, double and family units in the accommodation block and a  small campground. See BirdLife Australia's Broome Bird Observatory website for more information.

The uniqueness of Roebuck Bay has several dimensions. The bay lies in a corner of the Indian Ocean where the tides are among the largest on the Australian continent. Roebuck Bay is at the receiving end of the most species-rich of all shorebird flyways, and these shorebirds end up in the most biodiverse marine province of the world. Be it within the context of Australia, Australasia or the world, Roebuck Bay has no match.

Mangroves which grow around the bay provide the basis for the food chains of molluscs, crabs and fish. Shorebirds (or waders) harvest the mudflats and tidal areas around Broome, including many migratory species. The tidal mudflats of Roebuck Bay are thought to be one of the richest sources of food in the world for migratory shorebirds and large flocks stop over here during annual migrations from as far away as northern Siberia, where they breed in the northern summer.

Broome Bird Observatory lies on Crab Creek Road along the northern shore of Roebuck Bay. It is 25km from Broome by road. The road is readily accessible by two-wheel-drive except during the wet season. The last 6km may be very corrugated.

Visit the Atlas of Living Australia for a list of species recorded in Yawuru Conservation Estate.

We recognise and acknowledge Yawuru people as the traditional owners of Yawuru Conservation Estate. 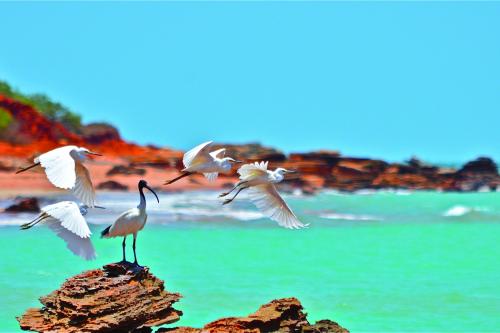 Calling all nature lovers, sea lovers and twitchers. Yawuru country, on the doorstep of Broome, is a shorebird wonderland!