North Kimberley is the largest marine park in Western Australia. At 1,845,000 hectares, it’s seven times the area of Ningaloo Marine Park. Its super-size makes it the second largest State marine park in Australia.

Discover some of the most pristine reefs in the world. The coral reefs of the north Kimberley have the richest marine life in Western Australia. Remarkable animals that call this home include dugongs, sea turtles and sawfish. Catching a big barramundi is on most people’s bucket list. Help protect this wonderful area and fish responsibly outside sanctuary zones.

The coastline that fringes the park is equally as spectacular as the water. There are some breathtaking spectacles in store. At King George River, twin falls plunge over sandstone cliffs 100m high. After heavy rains the gushing cascades are jaw-dropping! Cape Londonderry is another natural highlight. It’s the northernmost point of Western Australia.     In a super-sized park, you’d expect some super-sized inhabitants. The scenic Hunter and Roe rivers are great places to view large  crocodiles! Saltwater crocodiles are present in the North Kimberley marine park. It’s wise to keep your sightseeing well above the waterline.

Aboriginal people have significant cultural, spiritual and social connections to the sea country of the North Kimberley. The marine park will be jointly managed by traditional owners.  It’s good to know it’s in safe hands!

Don’t let a visit to this mega marine park be the ‘one that got away!’

Review – A once in a lifetime experience  We had seen King George Falls during the dry, but it was overwhelming the amount of water in the Wet! Jill H – Trip Advisor

Plan when to visit. Read this safety information about fishing. Consider travelling with a personal location beacon (PLB). In the event you need to be rescued it could save your life!

Estuarine crocodiles are present in the park, so in-water activities are not recommended. 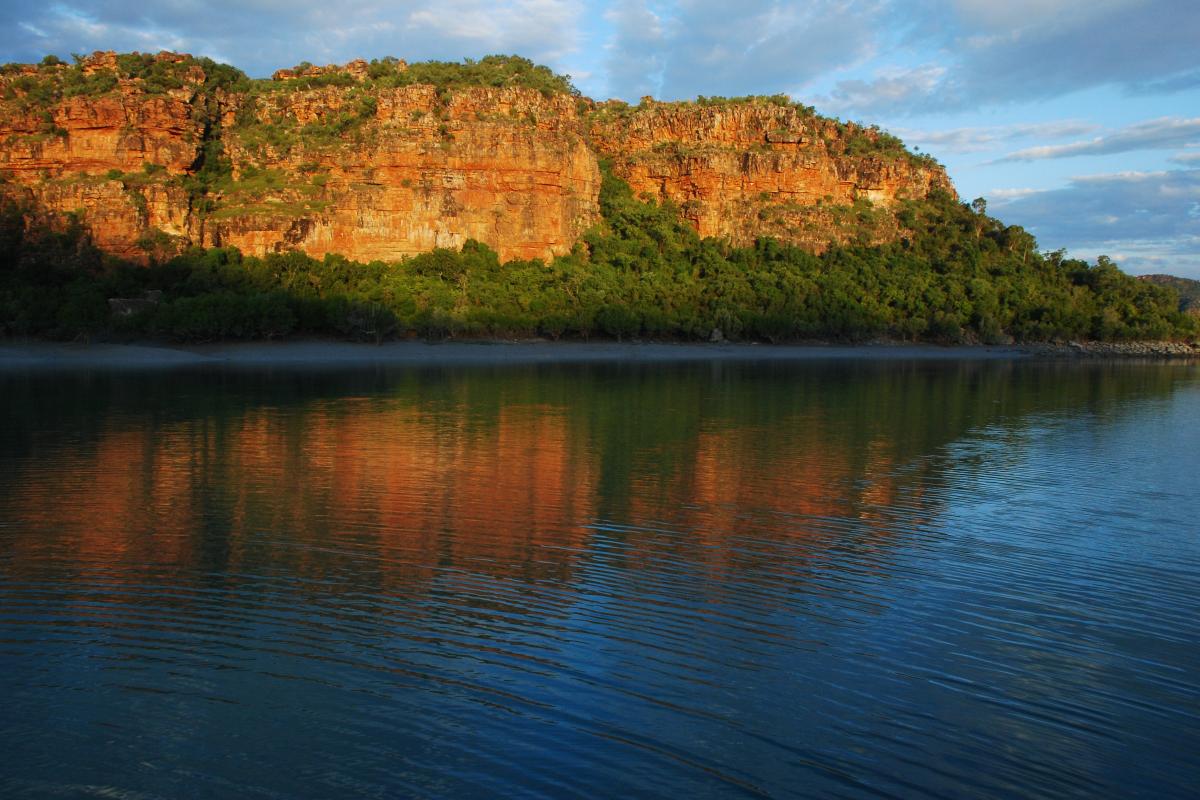 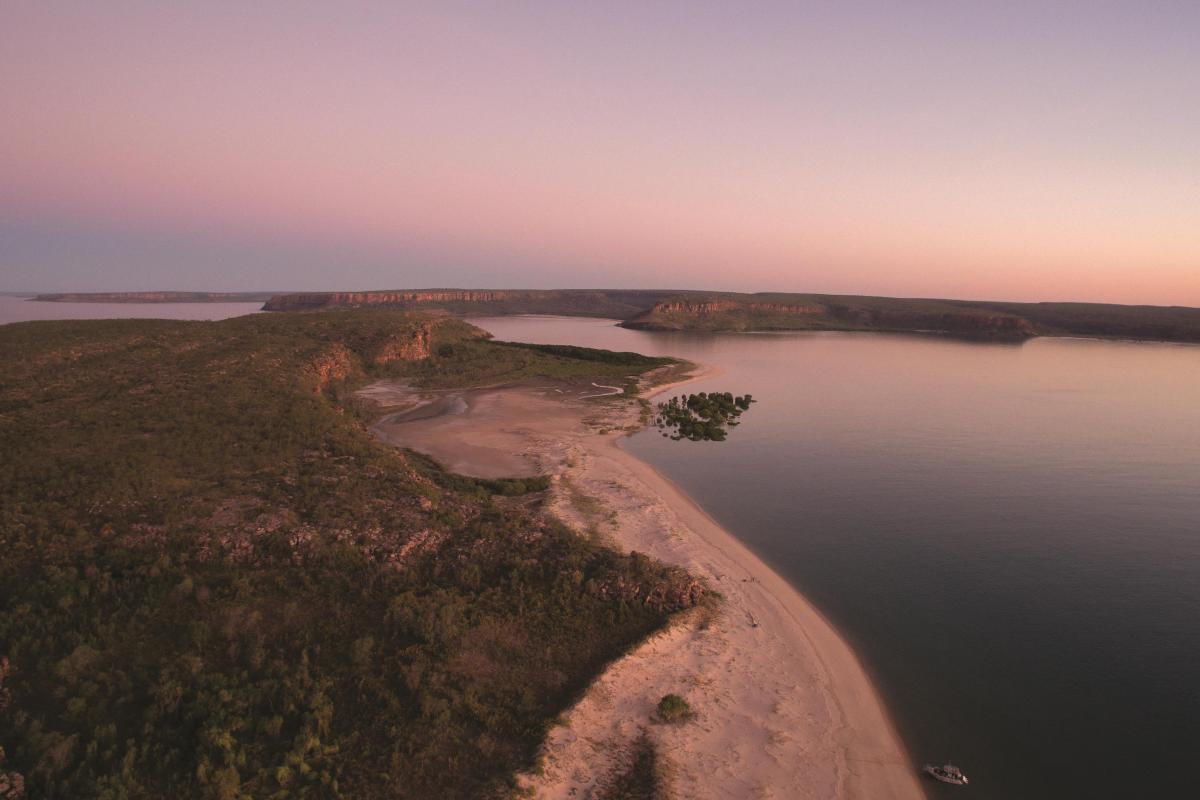 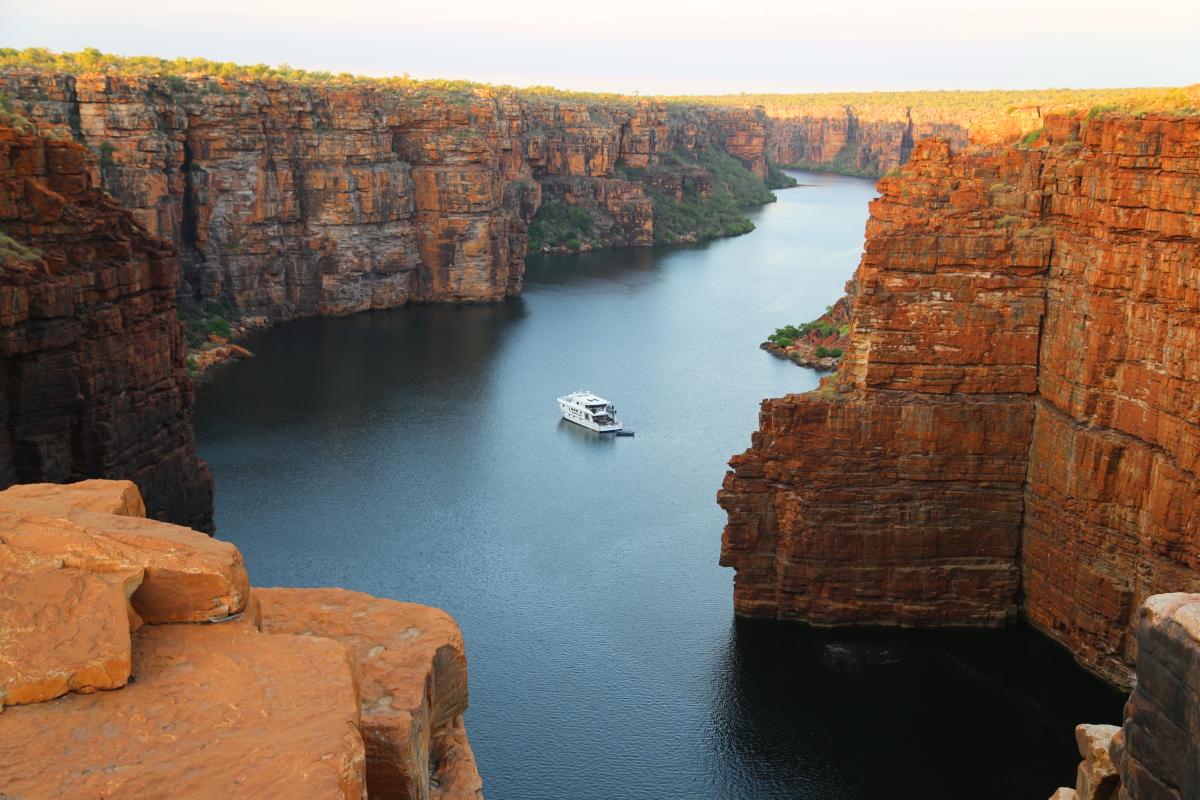 Visit the Atlas of Living Australia for a list of species recorded in North Kimberley Marine Park.

We recognise and acknowledge Aboriginal people as the traditional owners of North Kimberley Marine Park. 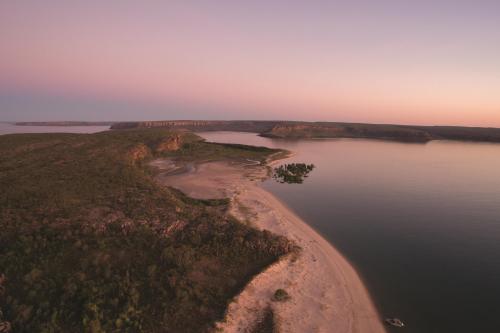 Reveley Island is located off the North Kimberley coast between Buckle Head and Cape Lambert. 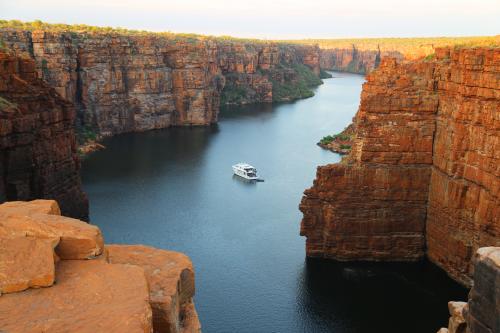 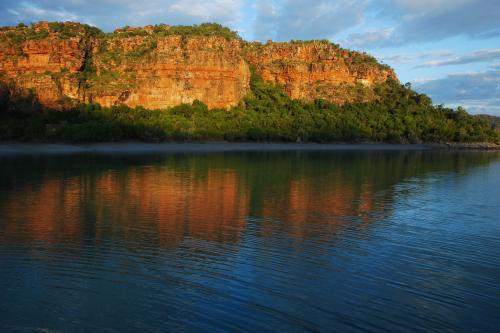 The Hunter River is a popular cruise ship destination due to the spectacular rock formation at the river mouth and two large waterfalls that drop 90m. 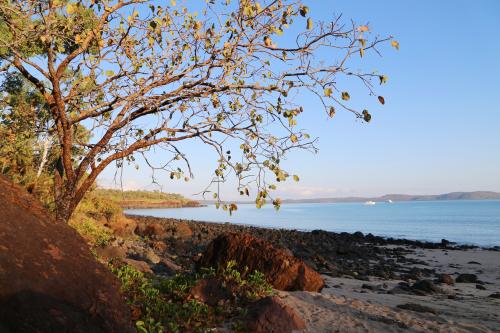 Careening Bay is frequently visited by people keen to see the historic Mermaid Tree in Prince Regent National Park and is a very beautiful spot in its own right.

Time Walk, is an easy but spectacular two kilometre return bush walk through Windjana Gorge in the far north of Western Australia. Discover a devonian reef gorge system which is unlike any other in the Kimberley, and keep an eye out for fresh water crocodiles and flocks of corellas.

Cockburn Lookout Trail is one of several excellent walks, best undertaken near sunrise or late afternoon. The 1.8km loop walk starts near the front gate at Home Valley Station’s tourist resort accommodation. The trail offers great views of the Cockburn Ranges and the meteorite crater.

The Western Australian Distillery Trail is a 4500km drive trail, stretching all the way from Esperance on the south coast to Kununurra in the far north of WA. Featuring 15 small batch distilleries, each with its own distinctive character and style, the trail passes through Albany, Margaret River, Swan Valley and Broome. Meet the makers and go behind the scenes to view the distillation process. Taste, touch, smell and hear the stories behind their unique flavours.

The legendary Gibb River Road, is an icon of outback adventure through the heart of the Kimberley in Western Australia’s north west. The 660 kilometre dirt track passes through remote station country with magnificent scenery and plenty of opportunities to get out of your vehicle to discover one of the many fresh water gorges.