The Point Walter and Blackwall Reach area is situated at the top end of a tidal gorge that stretches down to the ocean. This unique area comprises a mixture of sandy embayments and eroded limestone habitat. The Point Walter sand spit is an important site for waterbirds using the Swan River, particularly for feeding and resting.

Look out for the information near the jetty to learn more about the history of this area.

Back to Swan Canning Riverpark 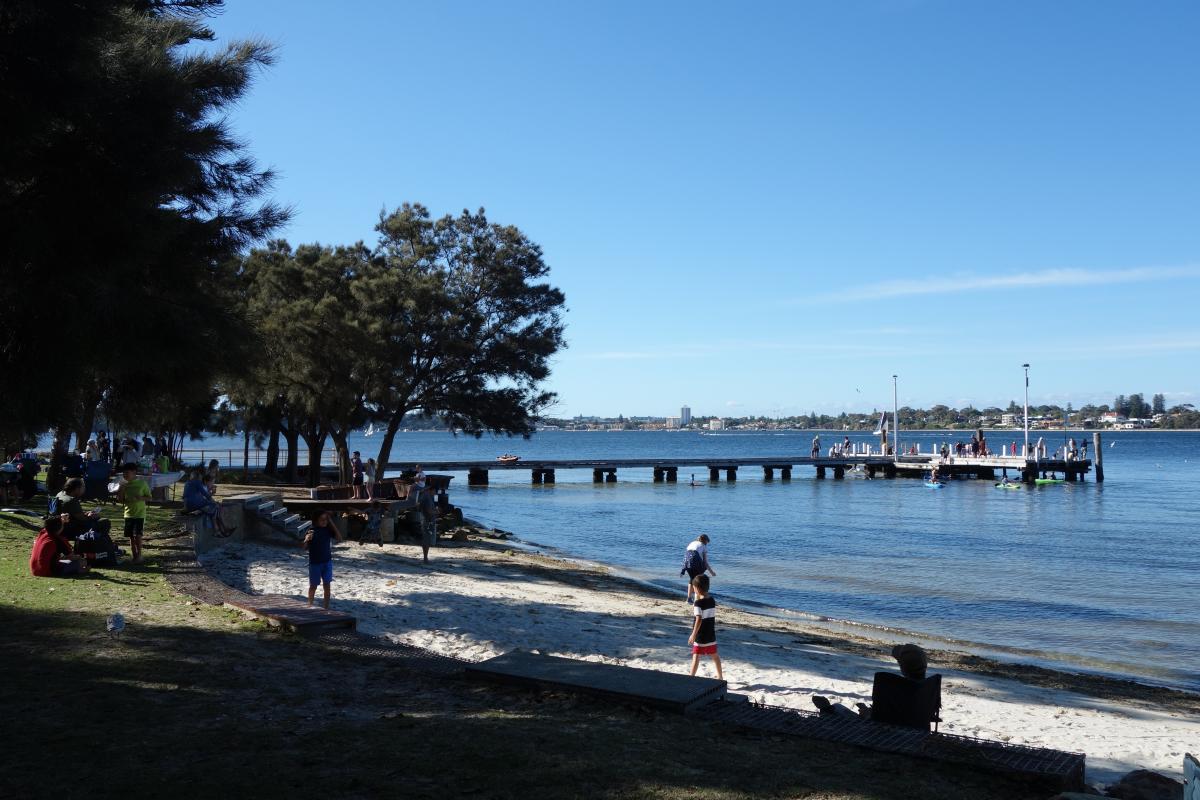 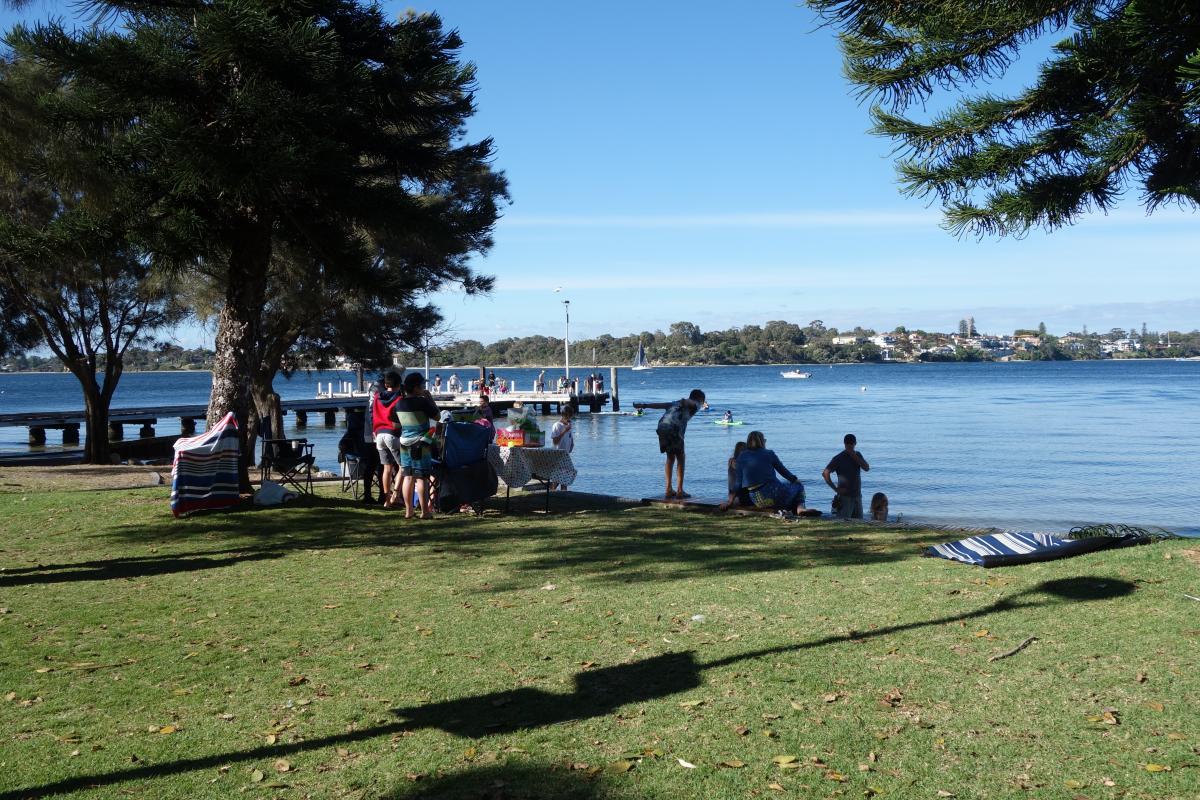 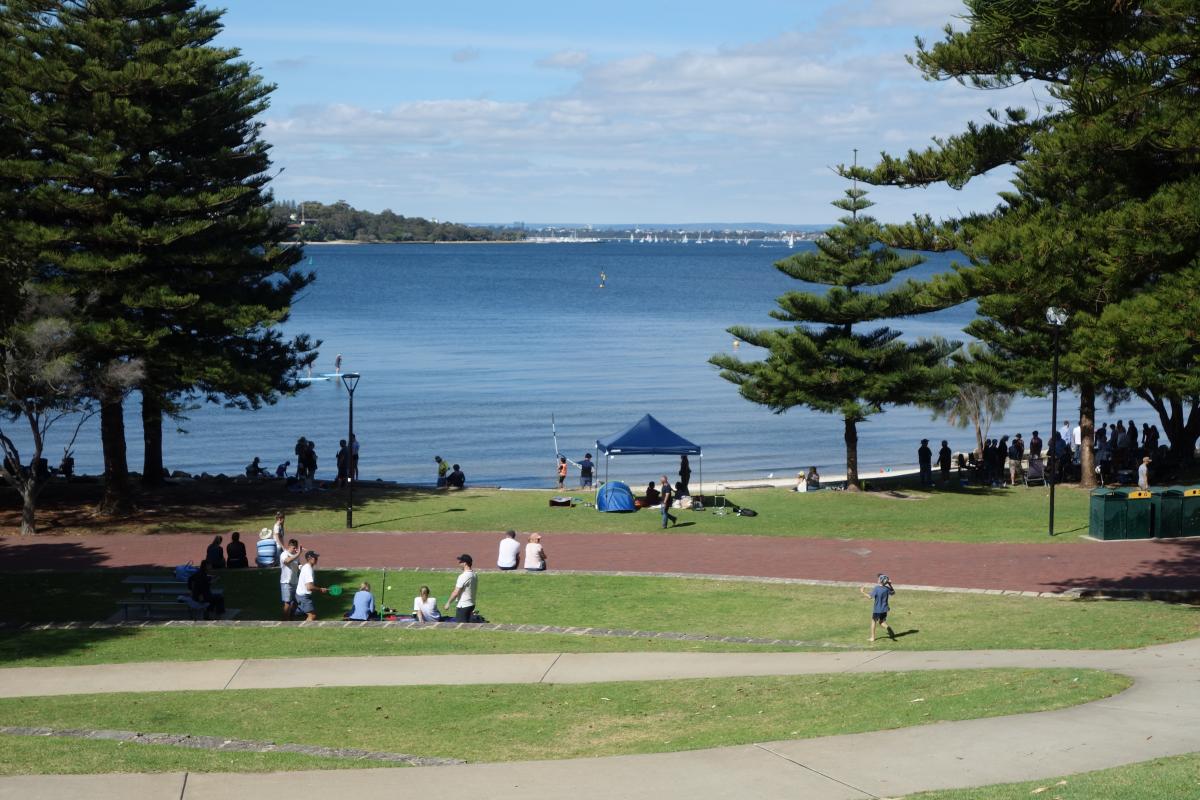 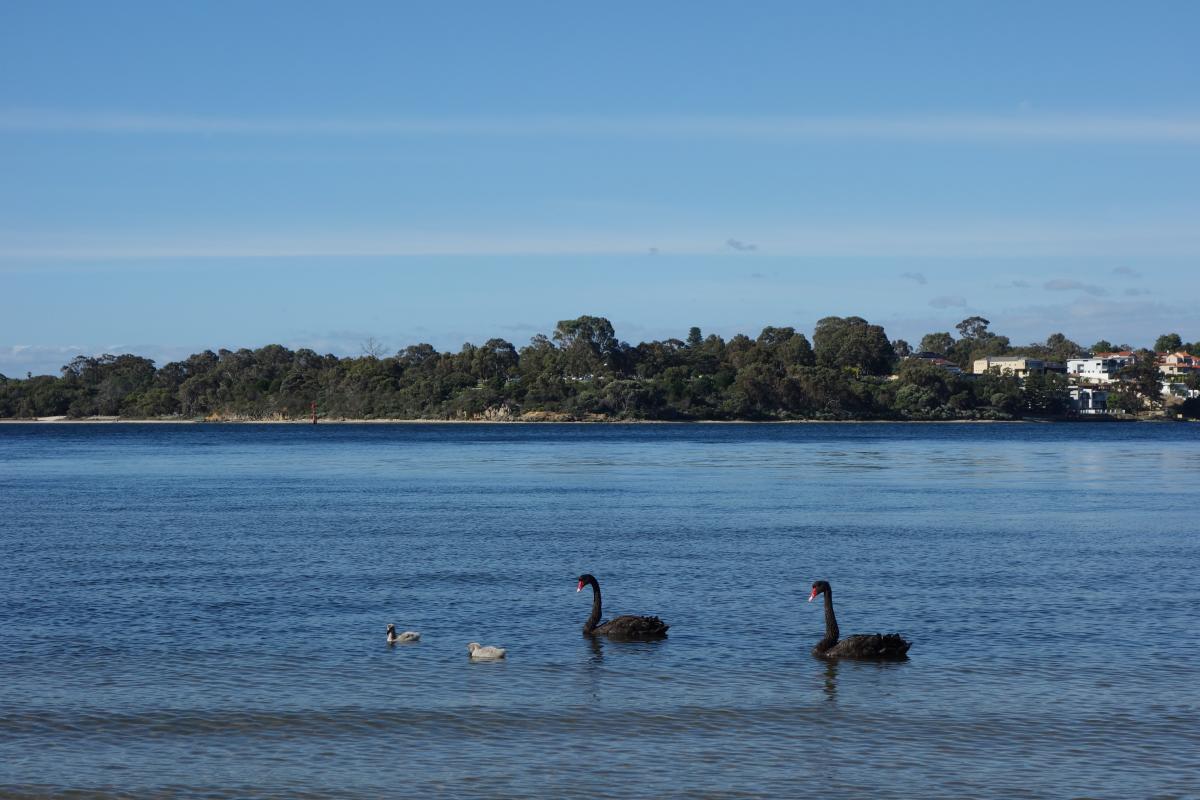 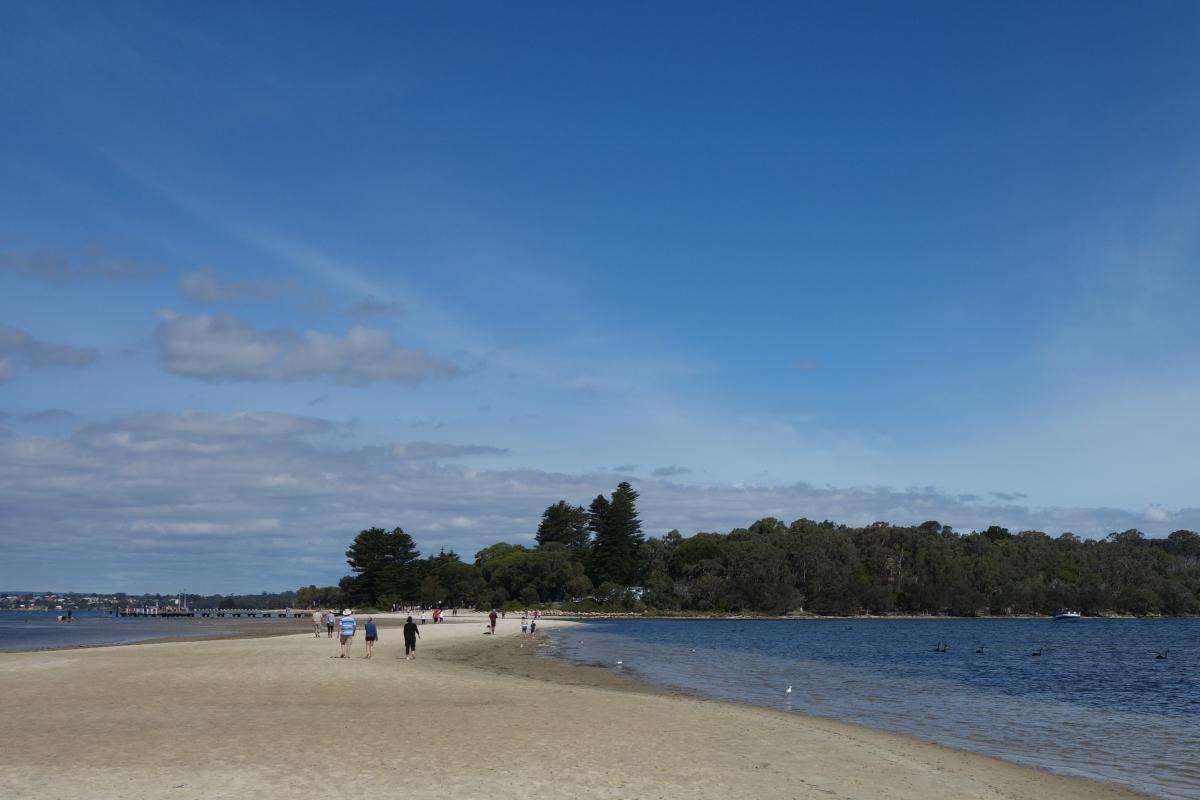 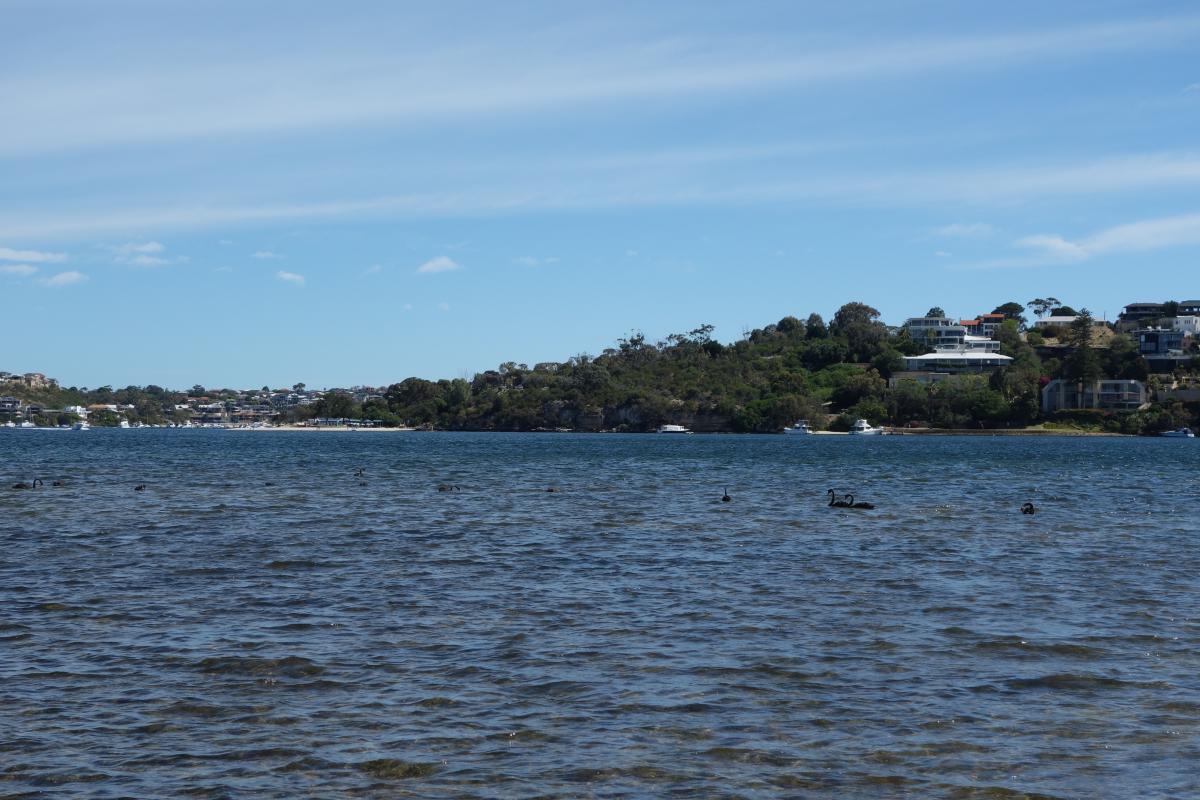 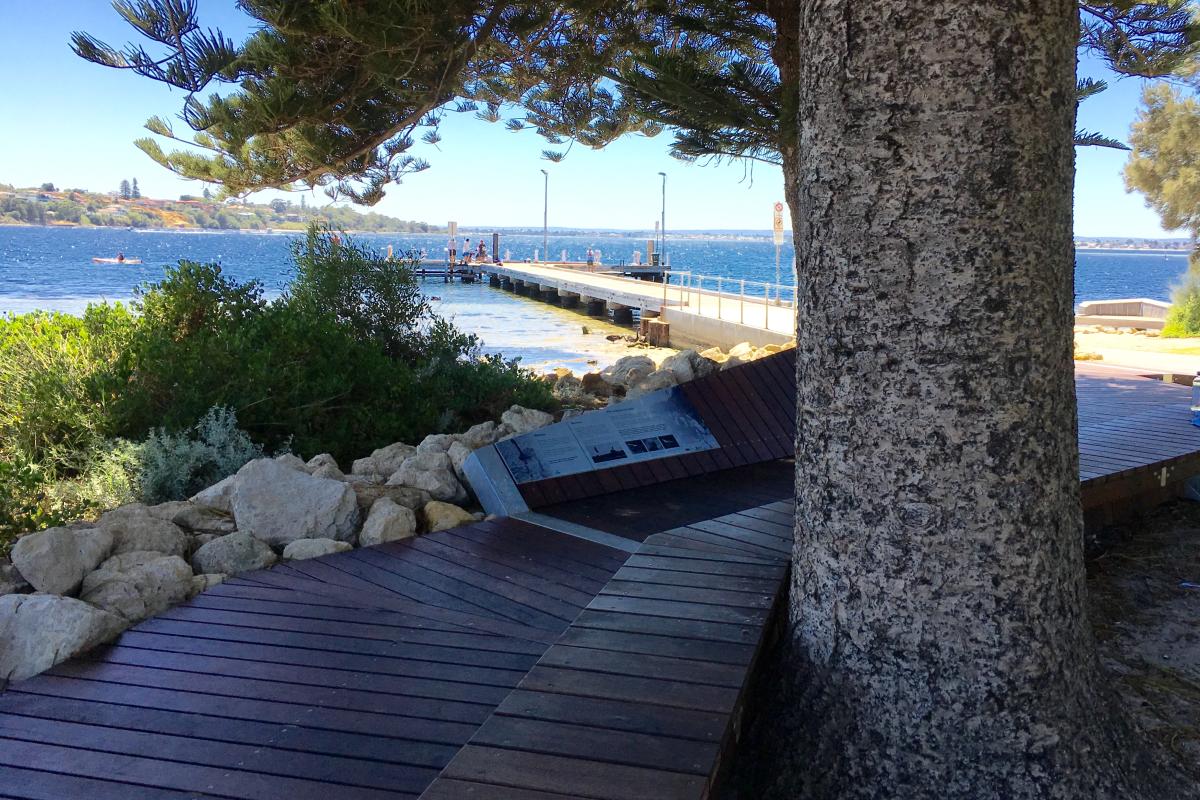 Click on the audio file to hear about the significance of Djoondalup (Point Walter), where Marie Taylor Whadjuk Elder talks about the white hair of Junda the Charnock Woman.

When you come here to Point Walter, to this white part, you are standing on the white hair of Junda the Charnock woman who left some of her hair here when she went back up to the Milky Way. Many of the Noongars used this particular sandbar to cross from side to side, and as they came over from the other side, on the Mosman Park side, which was also a woman's site, and there's a rock over there, and if you went over and you sat near, or you touched that rock, you would be pregnant within the next few weeks. And whenever a Noongar family came over from that side to over here, they would chop down a big tree, chuck it in the water and the little children would sit on that tree, and they would push that log over this way where it was deep and the men and the women would swim, but the majority of the time they were able to walk with that log floating on this white sandbar, and this white sandbar has really only been chopped off in the middle from when settlement came to the Swan River, and the barges would go up the river and dredge the sand away so that boats could go up the River.

Looking down river from Point Walter you may notice the remains of an old fish trap used by the Whadjuk people to catch a feed. Click on the audio file to listen to Whadjuk Elder Noel Morich explain how Nyoongars would catch fish using the traps.

If you look down river, you'll see the remains of an old fish trap that our people used to use, the Whadjuk people. What the old Whadjuk people used to do is herd the fish into the fish trap and stupefy the fish with the plants they'd brought down. They took the plants and they beat them all up and then tie them up and chuck them in the water, and when the tide came up, and they had little tiny openings, and the fish would all go in there. As the tide went down, they were trapped in there, so they'd come and pick up the fish. After the storms, when rocks get shifted, they always kept coming back to rebuild the traps, but what's happened here all the rocks have been moved. So, an example of it is in Oyster Harbour in Albany where you've got fish traps still as they were.

Welcome to Jennalup, otherwise known as Blackwall Reach. Jennalup is located within Whadjuk territory. Whadjuk is the name of the dialectal group of Noongar people from the Perth region, which forms part of the greater Nyoongar language group of south-west Western Australia. To the Whadjuk people, Jennalup is traditionally a place for women and children.

<Aboriginal language> Thank you. What I've said to you is welcome to the land of the rivers. This is my people's land. A long time ago they camped around here. They hunted and gathered and today we share this land together as everybody walks on the River where Maradungup and Beeliar meets.

The Footprint and the Guna

Click on the audio to hear about the significance of the Blackwall Reach limestone cliffs, where Marie Taylor Whadjuk Elder talks about the footprint of Djunda the Charnock Woman, a spirit woman who collected spirit children, keeping them in her strands of long white hair.
As well as how the Waugal, a powerful serpent-like creature formed these limestone rocks.

You are now at Blackwall Reach which is part of the Jennalup lands along here on the Bilya which is the river, and the Swan River wasn't named as such until early in the century but previous to that it was always called the Bilya which means the river, and this is where the Junda, the Charnock woman, her footprint has been left here and this is actually the deepest part of the river, so in the summer time you come down here and there are young people jumping and diving of this part of the river, and they are still doing it today as we'll see further on. Now, these limestone rocks, they all represent the 'guna' from the Waagle, and where ever he rested he always did a guna, which is a poop! When you look at the limestone rocks that are around here they just look like guna from someone sitting down and doing their business, but many of the old people used to come here, as children we would come down here, and swim and jump off these rocks and this is still happening today.

Looking out to the river you will see the beautiful white sands rushing to meet the limestone cliffs. These white sands are incredibly significant to Whadjuk women, for this area was once a birthing place. Click on the audio to listen to Whadjuk Elder Marie Taylor talk more about this special place.

If you look north from here where you're standing, you'll see some white sand which links up to the end of the Blackwell Reach rocks, you will see some beautiful white sand. That place is a very significant place for women, that is where the women would have gone and had their babies because they would have been able to walk down to the sand, into the water and use that fresh water that is found in these cliffs here to wash the baby, wash themselves, they'd have been able to build a little mia mia, and it would have been used for cleansing and healing as part of birthing of the baby, and today as we look up at the white sand it is still pure white today, so it makes it very spiritual birthing place for Aboriginal women in the past.

The wattle tree is special to Whadjuk people. Click on the audio clip to listen to Whadjuk Elder Marie Taylor tell the delicious secret of the wattle. Hint, if you look carefully you may find some unexpected treats that trickle from the trees.

If you look around you here, you'll see many different trees which are used for many different purposes within the Noongar community, and one of the trees is the wattle tree which is a type of Acacia, and from these trees we would get our gum, we'd cut it, the gum would weep, and we'd have our lollies, and sometimes you'd also get some witchetty grubs, the bardi grubs from it, and some of the banksias you can actually soak the leaves in and make a drink out of it, so many of these trees that you see around here are very special for Noongar people, and if we have a look over the back up there, there's a nest in one of the big gum trees and that belongs to Wardong the black crow, and that's why that old black crows have been hanging around here with us today.

Walk along Jennalup and take in a deep breath. Smell anything pungent? Click on the audio file to hear Whadjuk Elder Noel Morich explain what you may be smelling.

All along the river there's a species of acacia and if you take a deep breath, you may encounter the Boomer Bush, which is one of these acacias, and smell the pungent smell of a male kangaroo, and people walking along the track would come across this strange smell and it's from this tree, which is the name of the Boomer Bush, and when the male kangaroo comes across this bush he may decide to fight with the bush because of the smell, it's the same as his smell and he takes it to be another boomer, so he'll fight with the bush, so it's all along the river drying and if you're heading up bush to Geraldton, you'll get the same smell.

The Deepest Part of the River

Jennalup, the place of feet, is very significant to Whadjuk people. Click on the audio file to listen to Whadjuk Elder Marie Taylor explain why Jennalup is so important and how it became the deepest part of the river.

You are now standing on the middle part of Blackwall Reach which is still part of Jennalup, the place of feet, so in the past, there would have been a lot of walking along here, and today we are still walking along here. If you look around behind you'll see a cave under one of the rocks, and I would say, that things happened in that cave, especially when the water was lower. When we look at the limestone we still see the Waagle's excreta or his guna, and this particular area forms part of the footprint of the Charnock woman who Noongar's called Junda, and when we go down to Point Walter, we'll see where her hair still lays today. But she came she left her footprint here, and that's why the water all along this rock is really, really deep and you can't get to bottom of the water down here.

Visit the Atlas of Living Australia for a list of species recorded within a 5km radius of Point Walter and Blackwall Reach.

Jenna Biddi Yorga “women’s feet walking on the path”, in Whadjuk Noongar. We invite both women and men to walk this path, however we ask all the men who do so to respectfully acknowledge Jennalup (Blackwall Reach) as a women’s area in the past, and encourage the men to continue this acknowledgement into the future.